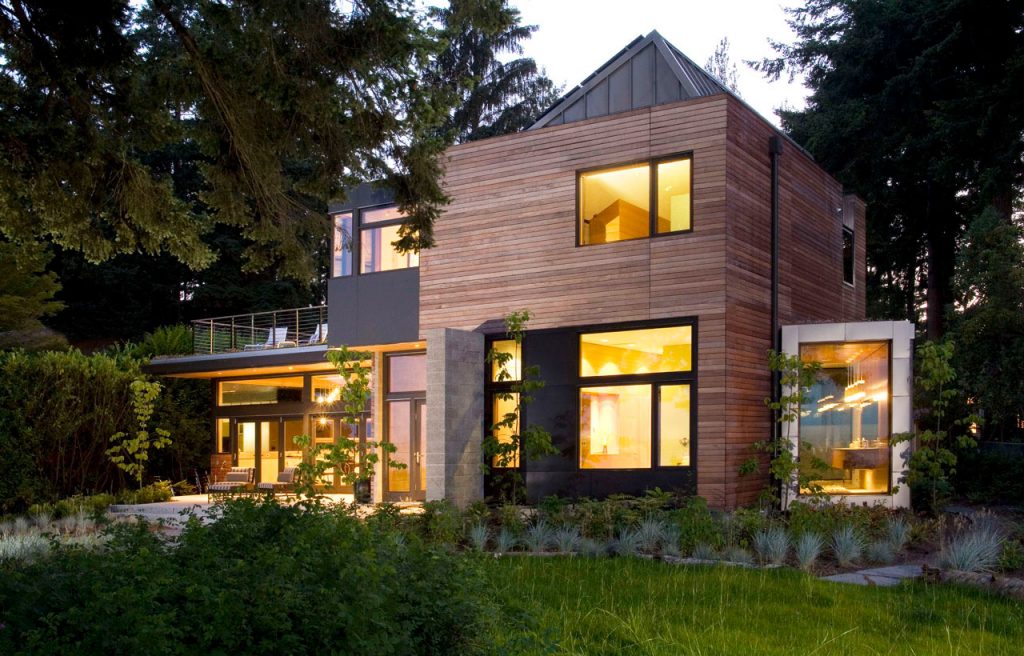 Perched high on a bluff, this magnificent home enjoys unique views of the Puget Sound, Mount Rainier, and Mount Baker. It is also the first LEED Platinum-certified residence in Washington State outside of Seattle.

The Platinum House is the first LEED Platinum-certified residence in Washington State outside of Seattle.

The site had an existing structure on it that was carefully taken apart and recycled, effectively diverting 98% of it from the landfill. Before construction began, subcontractors created detailed lists of framing and sheathing to more accurately place their lumber orders, therefore reducing waste. Interior trim and stair material were site-milled from fallen fir trees from on a neighbor’s property. After construction, the site was rehabilitated with native and drought-tolerant vegetation and pervious pavers. The crest of the bluff was restored with plantings to reestablish habitat and prevent erosion.

The entire house is oriented to capture sunlight and shade and designed to passively heat and cool itself. The home has a wide range of features aimed at increasing energy productivity and collecting rainwater, all while reducing the amount of energy used. A large “spine” running east to west forms a central thermal mass core for the house. This massive wall reduces temperature swings from day to night and is oriented in conjunction with operable skylights to take advantage of cooling techniques. This wall also acts as a boundary between private and public spaces. To the north, the private portion of the house is more enclosed. To the south, the glass-filled public spaces have abundant natural light and views. To the east, the side of the house that faces the water, the windows and doors open to allow natural, cool breezes from the Puget Sound to ventilate the interior spaces.

Our design team also created spaces with multiple functions in order to achieve a smaller overall footprint. For example, the washer and dryer and clothing storage are built into the master bathroom casework. The home’s roof became a vegetated garden patio providing a place to relax as well as increased insulation. There are sliding and bi-folding doors that transfer smaller rooms into larger gathering spaces, which can easily be connected to the outdoors, further facilitating the idea that rooms can serve multiple functions.

In the end, our team’s commitment to going green paid off: the result is a 2500 sf home that uses 70% less energy than the typical, comparably-sized home.